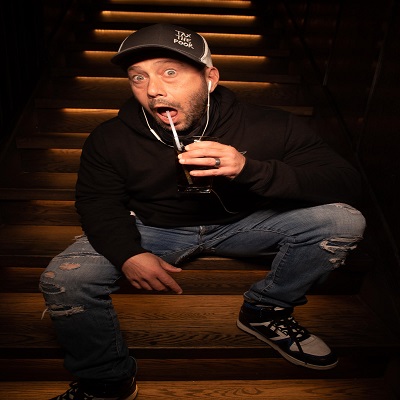 VIP Ticket is Limited to 50 per show and Includes 1. Choice of Seat within VIP Reserved Section at Tables Closest to the Stage. 2. Post show Meet and Greet at local Cigar bar

Aaron Berg’s world record breaking documentary 25 Sets is on Amazon Prime right now.  His special will be coming out this spring on major platforms.

He made his Comedy Central debut on THIS IS NOT HAPPENING  and has made two appearances on AXS TV’s LIVE AT GOTHAM, an appearance on GOTHAM LIVE VR as well as doing crowd work on BIG JAY OAKERSON’S “WYFD?!?”.

He is also an author and has two books out currently.  Mr Manners and American Etiquette.  His 4 albums are available on iTunes and Amazon “COMEDY COLTRANE”, “Mr. Manners Live From Long Island City” , “UNSCRIPTED -MIAMI” and “American Etiquette.”

Aaron can also be seen in the cult classic films Detroit Rock City, The Ladies Man and Boondocks Saints 2 as well as being one of the series leads on Hulu’s 24 Hour Rental.