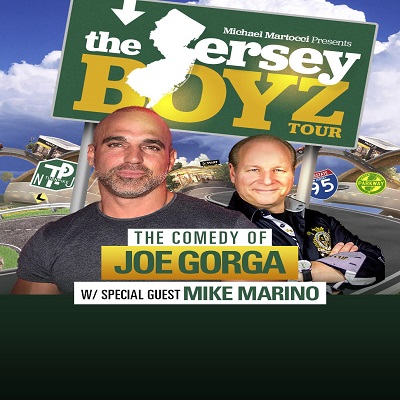 VIP Ticket is Limited to 50 per show and Includes 1Seat within VIP Reserved Section at Tables Closest to the Stage, Post Show Meet and Greet

From the inner city of Paterson, New Jersey to real estate mogul, real husband of New Jersey and author Joe Gorga has learned how to build an empire from the ground up. In The Gorga Guide to Success, Gorga shows how to succeed in business, in marriage, and in life by following timeless, old school rules to living with passion and remaining humble. Gorga understood early on that you “gotta have balls” in order to get ahead. From his first job selling papers to his first forays into business, he learned from his immigrant Italian parents how to work hard. As one of the stars of The Real Housewives of New Jersey, Gorga now applies those same principles to his family, his marriage, and his unexpected stardom.

Mike Marino is affectionately known to millions of his fans worldwide as New Jersey’s Bad Boy and is one of the most loved comedians of our time. He has performed in every major comedy club, theatre, casino and event center from New York to Los Angeles and all around the world.